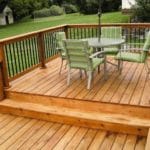 An experienced deck builder will tell you this: deciding whether to fix or replace your wooden deck is not easy. That’s because not all decks are made of the same wood species. Then not all decks are in the same condition or have to tolerate the same climatic conditions. Plus, not all of them are 100 years old either. And don’t forget that decks are more than the boards you step on. If most components – of those you don’t see, are rotten, damaged, broken, or warped, it’s best to get a new deck even if you keep the boards nice and shiny. On the other hand, if just one post rots, it may be hard to replace it but there’s no need to replace the entire deck. Simply put, each case is different.

Simple deck problems that can be fixed

Simple deck problems still imply serious headaches, if they are not fixed in time. If some railings are loose, this may be a safety problem. If some fasteners are missing, there will likely be a problem with the deck’s stability. The only difference between serious and simple problems is that the latter ones can be easily fixed. And such deck repairs may involve replacing rusty hardware, fixing protruding nails, installing new posts, et cetera. Not all such jobs are easy to make – and it’s recommended that they are done by deck builders. But you don’t have to replace the deck just because some nails protrude or a board is loose.

What if you walk on the deck and the deck is shaking? This may be an easy-to-fix problem, like tightening a few screws but it may also be a sign that the beams are rotten. And so, just one serious problem may imply an easy solution or an alert that it’s time to find a deck contractor.

So, how can you tell if it’s really time to replace (or not) the deck? If you have any idea about deck construction, you can take a look at all its components yourself and take it from there. If not, it’s best to call a professional deck builder to do the inspection and required repairs. What you are looking to find is any sort of damage, loose hardware, damaged railing components, rotten wood, broken beams, problems with the posts, rust, et cetera.

The most important deck components to check?

Problems with these parts are always serious. But as we said, some problems have repair solutions, even if they are severe. In order to decide whether to fix or replace the deck, you need to put two and two together. If the deck damage is extensive and you need to replace many components, you may be better off with a new deck. Similarly, if fixing a deck problem costs you nearly as much as having a new deck built, it makes sense to say that you would go for the latter. So, start with the deck inspection and take it from there.